VISITORS to Malaga’s gastronomy fair over the weekend of May 6-8 were treated by the bizarre sight of the longest ‘salchichon’ (sausage) the planet has ever seen.

The world-record breaking banger measured a whopping 255.4 metres, and weighed a staggering 375 kilos, but by Sunday had been wolfed down by the baying public, with more than 35,000 thought to have attended the foodie love-in, helping to tackle the quarter-kilometre-long dog.

Created by local firm Famadesa, who also donated food to five NGOs as part of their promotional effort for the event, the enormous embutido beats the previous record of 210 metres, set by Cordoban producer Gloria e Hijos de Rute in 2012. 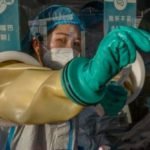