THE NATIONAL POLICE are searching for a Malaga man accused of stabbing his uncle with a type of samurai sword called a katana, reports from January 29 confirm.

The incident occurred in an apartment located in Calle Segismundo Moret near Malaga’s Civil Hospital and reportedly left the stabbing victim with serious wounds to his neck, chest, hand and leg.

Officers attended and found the victim still conscious, but blood-stained. He has since been taken to the Carlos Haya Regional Hospital in Malaga. Reports suggest that he has suffered injury to his vital organs.

The suspect, who was not present when police attended the crime scene and remains in a hidden location, was quickly identified as the victim´s nephew and is said to live in the same street as his uncle.  Reports from neighbours suggest the accused has assaulted his uncle before.

Investigations into the incident continue. 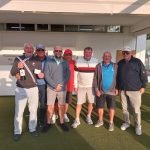