ON the morning of November 14 at around 9.30am, following the night of attacks on Paris, Gatwick North was closed down  for six hours by the police as a Frenchman was said to be acting erratically at an EasyJet check-in desk and was then seen to run away by armed police officers.

The man then dropped a package into a waste bin before being detained by the police.

The terminal was immediately evacuated with many passengers being transferred to hotels in the vicinity whilst disposal experts set off a small controlled explosion and in the remains they discovered an air-gun and lock knife.

Sussex Police later released a statement saying “Jerome Chauris, 41, unemployed and of no fixed address, but from Vendome, France, has been charged with possessing a dangerous article (an air rifle weapon) in any part of an aerodrome (Aviation Security Act 1982) and possessing a knife blade/sharp pointed article (a lock knife) in a public place (Criminal Justice Act 1988).”

Flights were completely disrupted and passengers had to cope not only with delays whilst the terminal was closed but knock on delays when aircrafts were out of position and also the backlog as afternoon flights were already scheduled to depart. 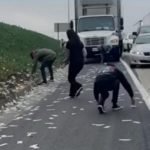