SPAIN’S AVE high-speed trains are the nation’s favourite way to travel domestically. The track took over in 2014, when the AVE and the long-distance Alvia trains surpassed air travel by 410,000 passengers. And while planes retain a bigger share of the summer holiday market, that gap is closing too.

In June, a total of 2.81 million people took flights within Spain, just 75,000 more than used long-distance rail. That’s a tiny difference compared to just three years ago, when air travel was carrying more than one million extra passengers at the start of the summer.

Renfe has used aggressive price discounting to win over new fans to the rail network, but in addition, 413 kilometres of rail have been added to high-speed lines under the current PP government, with 1,200 more in the pipeline, and trains are becoming more and more accessible.

However, both airlines and airports, and road transport networks, have complained that trains enjoy an unfair competitive advantage in Spain, with costs for rail infrastructure being paid for from the public purse. 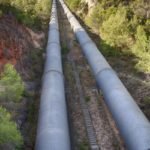