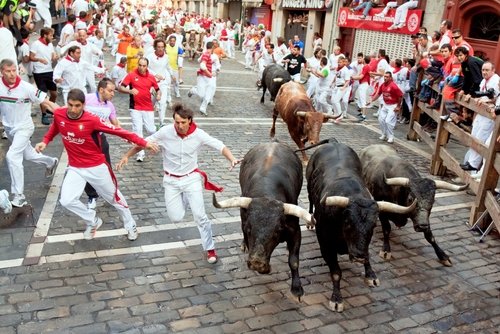 THE running of bulls is no doubt a controversial Spanish tradition recognized around the world. There is a little town in Spain attempting to turn it into a more animal-friendly fiesta.

Four years ago the town of Mataelpino, just outside of Madrid, began swapping bulls for balls in its annual festivities, pitting thrill-seekers against a giant 100kg polystyrene ball -three meters in diameter, gaining speed as it descends hill sides towards the town’s bullring.

The People for the Ethical Treatment of Animals (PETA) now wants to give a helping hand to towns across Spain and Portugal wishing to change the long-standing tradition by providing similar balls to interested councils.

Not only has the running of the balls attracted media coverage throughout Spain, but also increased the influx of tourists visiting the village, said Mimi Bekhechi of Peta, she furthered to say: “It is obviously profitable for towns to do this.”

Even though the ball run is an animal-friendly alternative, the truth is that the switch was motivated by the economic crisis, according to a local resident. In the face of economic cuts, a group of residents started to discuss how to fund the town’s annual festivities one night in a bar – “we started thinking, why not have a giant ball.

“The idea has paid off and has been a tremendous success.”

It has even been expanded to children running with smaller balls.

“Next year we are thinking about adding ramps,” he commented proudly.

The switch has also contributed to easing the town’s financial worries and now local authorities are in talks with several companies who are interested in sponsoring the run in exchange for putting their logo’s on the balls.


Local residents warn any potential thrill-seeker against writing off the challenge posed by the huge ball. “It is a strong wallop. The ball is meant to mimic a bull,” said one adding that a few runners ended up in the hospital last time around.