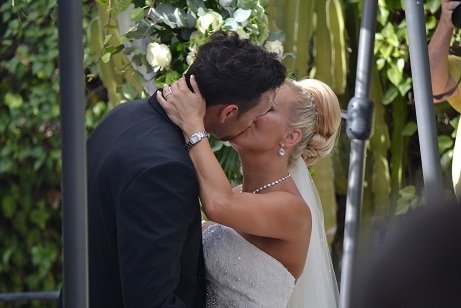 A BIT of Essex glamour came to Orihuela yesterday as the TOWIE crew were in town to film the wedding of Leah Wright.

The relative newcomer to The Only Way Is Essex wed Chris Tayler at her father’s restaurant La Finca de Eduardo’s in a glittering ceremony surrounded by friends and family and fellow TOWIE cast members.

Brother Elliott Wright was accompanied by his girlfriend Chloe Sims, and cousin Jessica Wright, a bridesmaid, was joined by her boyfriend Ricky Rayment. James ‘Arg’ Argent and friend Lydia Bright were also in attendance.

They all looked suitably glamorous, as you would expect from the cast of the reality TV show who always put a high premium on looking good.

Pick up your copy of The Euro Weekly News next week for more photos and the full story, including an interview with guest Michelle Keegan as she prepares to marry into the Wright family.