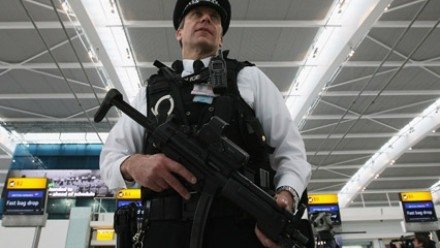 Governments are worried that Islamic terror groups, especially from Yemen and Syria, could be developing a non-metallic device that could be surgically placed inside a would be suicide bomber’s body. This would make such a device virtually invisible to current security checks. US intelligence believes that two groups of al-Qaeda could be working together to design such a bomb.

Therefore  there is increased police presence in airports as well as tighter checks on electronics and shoes. Staff in Manchester are swabbing hand luggage. There is even an increase in sky marshals on transatlantic routes.

These increased measures will lead to longer lines and delays. This increased security could last a few weeks.

Downing Street said that people should still feel free to travel normally but unfortunately there could be an ‘involving threat’.


David Cameron’s spokesman stated: “There are terror organisations around the world that seek to do the UK, its citizens, citizens of many other countries including our Western allies, harm. We need to always be vigilant to situations that can develop.”