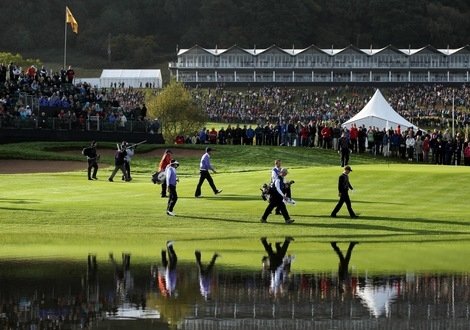 Five-time Ryder Cup winner Ian Woosnam expects this year’s tournament at Gleneagles to be the closest one yet.

Few have as much experience of big time matchplay as the former Ryder Cup star, who backed Paul McGinley to lift the trophy as this year’s captain, after a close tussle between Europe and the USA teams.

The Welshman said: “I just think it’ll be really close, I think this could be the first time we’ve been underdogs for a bit because of these young guys coming in from America. I don’t think we’re going to see big winning margins anymore.”

Paul Lawrie and Stephen Gallacher are two Scotsmen hoping to make the cut for the home team at Gleneagles. While the Americans look set to not involve Tiger Woods, but instead introduce a fresh and young looking line-up.

That is a move which Woosnam feels may help the visitors, adding: “For the Americans, the youngsters coming in, they haven’t got too many memories of being beaten so that’s good for them. We’ll still have some older players in our team who have played in a few Ryder Cups so that’ll give our younger players some experience.”

The 2014 Ryder Cup is less than 100 days away, with it being held from September 26 to 28on the PGA Centenary Course.

Europe enters the contest as the cup holders, having defeated the USA by 14½ points to 13½ in 2012 at the Medinah Country Club in Illinois, USA.