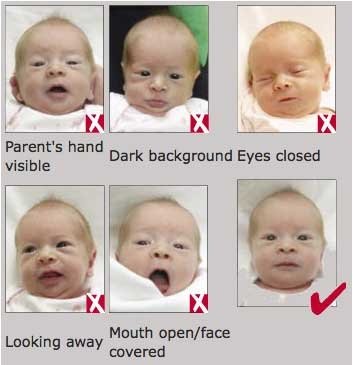 Mother Emma Mitchell from Inchinnan, Renfrewshire, has criticised the British Passport Office after it took over five hours to get a useable photo for her six week old baby’s passport.

Newborn Lucas is due to fly to Costa Del Sol in August with parents Emma Mitchell and Graeme Thursby.

The 29-year-old mother had hired a professional photographer, but as the passport office only accepts pictures with the subject looking directly at the camera, with a straight face and both ears visible, the photo session soon turned into an all day marathon.

Miss Mitchell, a company administrator said: “My hands couldn’t be in it at all. I was holding him at the waist and I was scared that his neck was getting sore. I think the rules are ridiculous. They are too constraining. But I’m not the first and I certainly won’t be the last parent to struggle with this. I just hope his passport comes on time.”

The family paid a £90 fee for their baby’s passport, but it’s likely that the application form and the photo have joined a massive queue waiting for processing as there are reportedly 500,000 passports in a backlog.

It was revealed last week that the Passport Office has asked the Home Office for hundreds of extra staff in order to cope with the unusual backlog of applications.