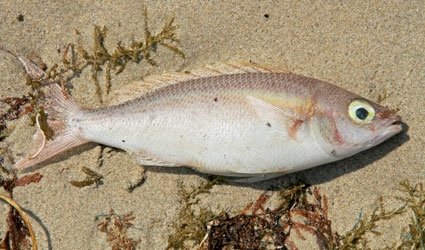 Hundreds of dead fish have appeared in Mallorca on the shores of Son Baulo.

Investigations have been started by the local council and environmental employees to find out where the fish may have come from and why.

Passers-by were surprised to see dozens of metres of shoreline covered in dead fish, most of which were only three or four centimetres long, although there were a few larger sea bass, weighing in at around two or three kilos.

There have been at least three similar incidents in the area in the past; one investigation found that they had died through lack of oxygen, another tracked the problem down to a nearby hotel with toxic waste on the premises.

In the recent case, no other animals appeared to suffer; so toxic waste is less likely to be the cause.


There is a patch of still water just before the river mouth where, at certain times of the year the levels drop and the water becomes stagnant. Neighbours have suggested that there may be less danger to the fish if the water could run year round into the sea to allow more oxygen to circulate in the water.