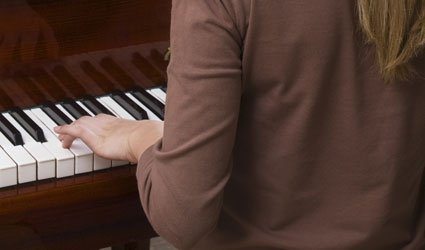 WE went “en famille” to our local music school’s piano recitals this week. We went to watch our little girl La Gidg, who was playing along with all of the other piano pupils.

She was number eight on the programme, eight of 42. Gidg was feeling quite nervy, despite practicing a lot at home on the piano that Facebook gave us : thanks to a Facebook friend we had our baby grand donated to us three years ago, and then thanks again to other Facebook friends it was transported to our house for free!

We have to live up to this; we have a promise to keep. We have been quite strict with her, I have insisted that she learn to play the piano and go to her weekly lessons which she grumbles about constantly, and music isn’t easy to learn, it’s another language really, with all of its rules and regulations. I know, I know: and the pushy parent award goes to…

Gidg managed to get through her piece, more or less. She stumbled over a couple of parts, but she didn’t give up, throw her hands in the air and storm off or cry. So, given that all of those things had happened during home rehearsals over the preceding week we decided to mark this one down as “a win” for the team.

Gidg was in amongst a mixed group of kids and teenagers, some of them also stumbling, and losing their way in the music, and some of them skipping merrily through the lot without a glance at the music or even their fingers.

Although it was quite tempting to just slip out the back of the auditorium after Gidg had done her bit, we stayed put. It’s not the “done thing” anyway is it? I think it’s important to show the same respect for the other young musicians as they had for Gidg. There was some serious talent playing that night at the Andratx municipal music school. You read that correctly, our local music school is run by the council.

I’m glad that we have the school, it is a fantastic opportunity to be able to study there, and it’s extremely cheap. Just €20 a month gets Gidg a 30 minute piano lesson every week. If she can reach the standard of some of the other pupils then it would be amazing, having the ability to play an instrument is a gift that I would hope would stay with her for all of her life and that she may eventually appreciate.


As we sat there in the darkened auditorium, with Gidg leaning her head against my shoulder finally enjoying listening to some sensitive, mournful and elegant piano playing I realised that not everything should be taught: some things should be felt to be understood, and that’s just as important as following the rules.