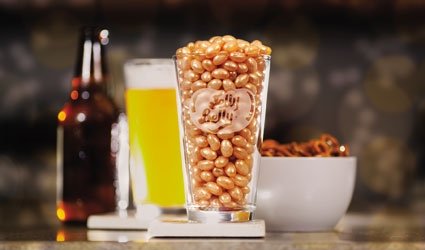 THE Jelly Belly Candy Company has decided to pay homage to its German ancestry by launching the world’s first beer flavoured jelly bean.

The California-based company claims beer connoisseurs will find the aroma of the new Draft Beer Jelly Belly beans – to be launched world wide –  to be mildly bready.

Their flavour profile is said to be clean with notes of wheat and a touch of sweetness.

And it is alcohol free.

“The recipe includes top secret ingredients, but I can tell you it contains no alcohol,” said Ambrose Lee, research and development manager for Jelly Belly.


Beer has been a highly-requested flavour by customers for decades, the sweets company said, and it’s been released after three years perfecting the recipe.

This is the latest in a line of flavour innovations from Jelly Belly, which includes the first non-alcoholic gourmet flavour with Mai Tai.


They also released the Bertie Bott’s Every Flavour Beans, based on a product mentioned in the Harry Potter book series.

These are regular jelly beans mixed with unusually-flavoured ones in each box.