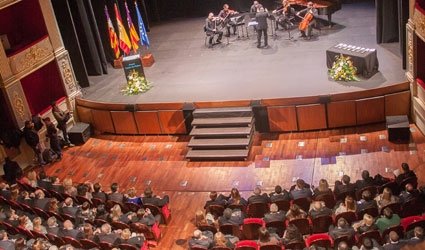 I HAVE told you before to join the Europeos Por Espana group. And here’s another example of why you should.

Last Monday night, my daughter La Gidg with my husband and I accompanied a group from EPORE to the 59th presentation for the Premis de Ciutat Palma. It’s the yearly prize giving for cultural achievements in the city, and it’s quite fancy pants as it turns out.

Picture the scene in the foyer of the Teatro Principal: in piled local mayor after mayor after mayor, it seemed as if every single area in Mallorca was represented that evening along with the European community (i.e. Kate Mentink and the gang from EPORE).

There were plenty of “Grand Dame” looking ladies with furs (and I imagine major hairdressing bills), some blokes in suits of armour and ceremonial swords, and lots and lots of people. The local Spanish press were there in force, with TV cameras and plenty of snappers. And us.


I’d asked before if there was any particular dress code, as we have (shabby lot that we are) been caught out before when we’ve rocked up to an afternoon event in jeans only to be welcomed in by lounge suits and ball gowns. We were slightly smarter than usual in preparation for an evening at the Teatro Principal but you don’t really have to worry when you are in such a lovely building at a special event. If you haven’t had a chance to go inside and enjoy the space then do get yourself along at some point. It has been laid out to benefit the acoustics of the room, rather than the possibly more familiar theatre auditorium layout, which means there is a large open space for the sound to float through and plenty of boxes to sit in on the many levels.

La Gidg saw the top of her music teacher’s head (her teacher did not believe her the next day when she told her that she had seen her, and only changed her mind when La G described exactly what she had been wearing and where she had been sitting. THAT’S how special it was to have been there).

It’s a privilege to be invited to these sorts of events, just after Christmas we were able to go to the Pregon at the Palma Council which was amazing as well. And it’s because we’re members of this association. It’s also vitally important that we show up. If as foreign residents of Mallorca you want to have a voice or want to be taken seriously, or want in any way to have an effect on the society that we live in then you’ve got to show up, and you’ve got to be seen to be there.


Thank you to Kate and the people at EPORE for yet another chance to be there. If you want to join the association then visit www.familymattersmallorca.com for more information. I can highly recommend it.