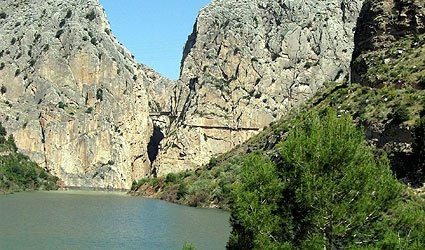 NINE companies have presented their tenders for the project to restore the ‘Caminito del Rey’, known as the ‘death walkway’, in Alora.

The project, which is of great environmental and tourism interest for the project has a budget of €3.12 million from the Provincial Government and is due to be ready for opening in early 2015.

The President of the Provincial Government, Elias Bendodo, said it should cease to be a dangerous and banned place to become somewhere that everyone can enjoy.

The Caminito del Rey passes across the Gaitanes Gorge between Alora, Ardales and Antequera, and was inaugurated by King Alfonso XIII in 1921.

It is 100 metres above the river and will be four kilometres long and one metre wide. The new walkway will be made of wooden panels on metal supports drilled into the rock. There will be parts with glass panels so visitors can see the gorge below.


The projects presented by the nine companies will now be studied and the one chosen will be named in February.