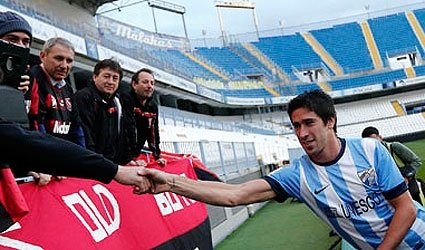 The Argentinian-born midfielder says he chose to come to Málaga, despite having other offers on the table, because he likes “the Spanish League and the Club. I really enjoy a challenge and I can’t wait to play in Europe, perform well and become recognised within Spanish football.”

The Argentine midfielder, who has been in training for the past few days with his new teammates, adds: “I’m settling into life here well, I’m feeling good and loving being here in this city.  I think I’m adapting quickly to the team in training and think we’re definitely on the right track.  I’ve come from a team that plays very good, fast-paced football, which I hope I can put into practice here with Málaga,” explains the new Blue and Whites’ player.

Pablo Pérez also talks about Tata Martino, the FC Barcelona coach, whom he worked under in Argentina: “I hope I’ll get to see him and thank him for everything he did for me.  He taught me how to be a footballer and a good person, so I hope to get the chance to say thank you to him personally.”

Mario Husillos talks about the new player’s passport
The Club’s sporting director answers a question regarding Pablo Pérez’s passport, which at the moment is non-European, but could become European over the next few days: “We’d have great possibilities if Pablo Pérez has a European passport, but we just need a little more time to resolve the situation, so it’s not certain whether we’ll receive the international transfer before Friday.”

Husillos thanks Pablo and his agent: “He wanted to come here, despite having other, more lucrative, offers on the table.  Pablo wanted to be a part of Málaga CF, which is an important value,” adds the sporting director.