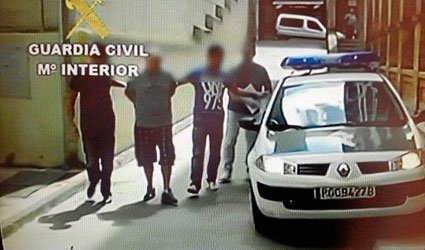 A MAN, 38, wanted by the FBI on child sex charges and arrested in Magaluf is now back in the US and facing life imprisonment thanks to a British bar owner.

Jeffrey Lane Wenzel, from Montana, is charged with raping his stepdaughter and possessing a large quantity of pornographic material involving children.

He had served in the National Guard and claimed to have been destined to Afghanistan, Iraq and Serbia as a US Marine. He was charged in June 2012 with a felony sex assault crime for activity that began when the girl was about 13.

In November 2012, he was charged with two counts of sexual abuse of a minor following admissions that he enticed the girl to send inappropriate photographs of herself via text message.


He flew to Seattle and from there to Paris, Frankfurt and finally Mallorca, saying he had to “save his life”. Prosecutors added a felony bail jumping charge and a judge issued a warrant for his arrest.


Wenzel’s whereabouts remained unknown until his capture in Mallorca where he found work at a British-owned Magaluf bar last summer.   However, shortly afterwards, his new boss began to suspect him, carried out an internet search and found the truth. He alerted the authorities and the man was arrested by Guardia Civil in Calvia in September.

He was remanded in prison in Palma and has now been extradited to Helena Prison, in Montana, on bail of $1 million.

If he finds a way to pay the amount, he must not leave the county where he will stand trial and wear a tracking device at all times.

His trial on the bail-jumping charge is set for May 12; he faces a maximum 10-year sentence, and a possible life sentence on the sex charges if convicted.