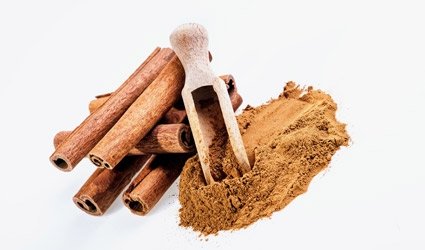 OH, the smell of cinnamon simmering in a hot drink or baking in the oven…few aromas are more inviting and raise the spirits more, while also providing health benefits.

Research at the University of Toronto has found cinnamon consumption to significantly reduce blood pressure in certain diabetic and pre-diabetic patients. Since cinnamon aids glucose control by enhancing the effectiveness of insulin, it also seems the household spice has a beneficial impact on blood-sugar levels. Traditionally, cinnamon has been widely used in Indian ayurvedic medicine.

The now-common spice comes from the aromatic inner bark of several trees within the Cinnamomum genus. In Spanish name canela, it is derived from the Latin cannella, meaning “small tube,” based on how it curls up while it dries. The spice keeps well in either ready ground form or in the original sticks (curls of bark).

Cinnamon is good for oral health as well, killing bacteria associated with gum disease. Perhaps the Sri Lankan custom of using cinnamon sticks as toothpicks might catch on here too?