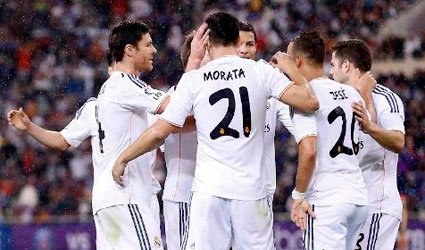 Jesé’s goal secured the win for the Whites, who also hit the post and the crossbar, against PSG in their first ever match in Qatar.

Real Madrid start 2014 with a win. Jesé’s first-half goal, following a great Morata assist, gave the Whites the win against PSG in their first ever match in Qatar. The winning margin could have been bigger had José Rodríguez’s shot not come back off of the post in the 39th minute and had Benzema’s shot not hit the bar in the 52nd minute after some great control and some spectacular skill in the area. The scoreline was not the only good news of the day. Academy player Jaime made his first team debut.

It seems that Real Madrid have the measure of PSG. In the friendly in Gothenburg during the preseason they beat the French team with a goal from Benzema, and today they repeated the result in a match that was always going to be a good spectacle. In fact, Diego López’s noteworthy save in a one-on-one with Cavani in the 15th minute was the prelude to a series chances for the Whites that, three minutes later, culminated in the goal. Morata played a brilliant through ball for Jesé, who finished well. From then on, the French side, led by Ibrahimovic, had control of the ball and Diego López emerged as the Whites’ best player before the break.

The Whites, who started with a team that included seven academy players, soon had the scoreboard in their favour. PSG, starting with what was almost their first eleven, were not going to let the match slip them by so cheaply and began to create more and more danger but Diego López remained unbeaten despite Ibrahimovic and Cavani having opportunities to level the match. One player clearly stood out in the last five minutes of the first half; José Rodríguez. He hit the post in the 39th minute following Ronaldo’s incredible pass, and then two minutes later, his shot from the edge of the box went just wide of Sirigu’s goal.

Ancelotti fielded a completely different eleven for the second half and in the process gave academy player Jaime his first team debut. Blanc only made three changes. He brought on Marquinhos, Lucas Moura and Maxwell for Alex, Lavezzi and Digne Lucas. The first chance was created by the Whites, who hit the woodwork again. Benzema controlled Marcelo’s cross with his chest and shot on the half-volley in the 52nd, only to see his effort hit the crossbar despite the spectacular piece of skill from the Frenchman deserving more.


From then until the end of the match, Real Madrid were very solid and stifled any hint of danger towards Jesús’ goal, mainly from set pieces. The final whistle was blown with Jesé’s solitary goal deciding the match and meaning that Ancelotti’s team started 2014 in the same way that they finished 2013: with a win away from home.