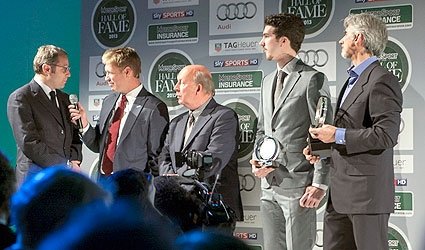 Motor Sport magazine is delighted to announce that Sky Sports will return as the official exclusive broadcast partner for the 2014 Motor Sport Hall of Fame. The star-studded evening will be staged at Covent Garden’s historic Royal Opera House on Wednesday 29 January and launches a landmark year for the eminent publication that celebrates its 90th birthday in 2014.

Sky Sports followed the distinguished Hall of Fame evening in 2013 and now, building on that success, will be stepping up its coverage with a dedicated, stand-alone programme. The F1® Show Special: Motor Sport Hall of Fame will be aired at 8pm on Friday 31 January 2014 with repeats on Sky Sports F1® throughout the following week.

“The Royal Opera House is a suitably grand venue to honour some of motor sport’s greatest names and we could not dream of a better Broadcast Partner than Sky Sports,” said Damien Smith, editor of Motor Sport magazine. “To mark our 90th birthday in suitable style, we have four true motor sport legends being inducted into the Motor Sport Hall of Fame in January. It’s going to be another memorable evening and for those not lucky enough to be present, as in F1, Sky Sports F1 will be the next best place to follow all the action.”

The names of those being inducted into the Motor Sport Hall of Fame remain a closely guarded secret until the event itself but next year’s four chosen stars will be joining 25 of the sport’s most revered personalities who were either founding members in 2010 or have been inaugurated since. These include Formula 1® World Champions such as Ayrton Senna, Michael Schumacher, Jim Clark and Sir Jackie Stewart as well as other motor sport luminaries including Enzo Ferrari, Colin McRae and Adrian Newey.


Since its launch less than 24 months ago, Sky Sports F1® has totally revolutionised the way fans follow Formula 1® in the UK – a fact underlined when it was recently awarded ‘Best TV Broadcaster Award for Outstanding Coverage’ by the FIA for the second year in succession.