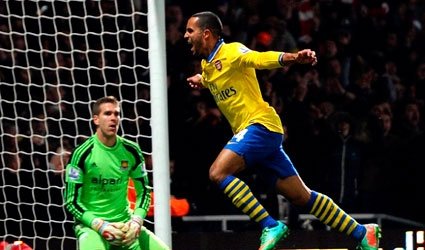 Arsenal went back to the top of the Premier League table with a 3-1 comeback win at West Ham on Boxing Day. Arsène Wenger’s side missed a host of chances in the first half and were made to pay 53 seconds after the restart when Carlton Cole fired home.

For a while West Ham looked like grabbing a second but Walcott’s two goals from inside three minutes turned the game around. Lukas Podolski had supplied a crucial assist for the second and, 11 minutes from time, the German fired home a killer third to secure the points.

It was a perfect way for the striker to celebrate his return to the side after four months out with injury. Liverpool have the opportunity to leapfrog Arsenal once more when they kick-off at Manchester City later today.

But, after three Premier League games without a win, Wenger’s men needed a response. And today they showed they have the character to compete for the title. Upward and onward.

Wenger sprung a surprise before kick-off by NOT making changes. After the draw with Chelsea three days earlier, the manager had spoken of rotation. In the end the only alteration was enforced. Tomas Rosicky picked up a knee injury in that game and so Santi Cazorla came in.

The game started at a pace in keeping with the long tradition of Boxing Day derbies in the English top flight.

West Ham’s early tactics involved trying to put in Matt Jarvis behind Bacary Sagna as much as possible. It worked sporadically but the winger’s crosses were dealt with effectively.

When Arsenal settled they nearly took the lead almost immediately. Sagna curled over an inviting cross that brushed off Olivier Giroud’s hair after the Frenchman beat McCartney in the air.

Mohammed Diame was fouled on the left and Mark Noble’s curling free-kick was beaten away from Wojciech Szczesny. West Ham had greater pressure but Arsenal were breaking quickly and creating the better chances.

On the quarter-hour, Adrian had to make a flying save from a header by Santi Cazorla fully 18 yards out.

Ten minutes later, Aaron Ramsey lofted a pass over the West Ham defence for Walcott but the Arsenal winger could only sidefoot a shot into the sidenetting.

Then Giroud went clear momentarily in the left-hand channel but screwed his shot wide when he should have hit the target at least.

As half-time approached Arsenal were starting to take over. Ramsey and Ozil burst to either byline but no-one could convert their crosses.

On the whistle, Gibbs raced down the left and fired low across the area. Giroud miscued when the merest touch would have put Arsenal ahead.

The danger of the visitors’ first-half profligacy became apparent 53 seconds after the restart.

Kevin Nolan was allowed to shoot unchallenged from the D. Szczesny spilled the ball to Carlton Cole, who fired home from close range.

Although Per Mertesacker claimed a penalty seconds later when his shot hit the arm of James Tomkins, West Ham would have further chances.

Szczesny had to save from Jarvis from close range then an unmarked Joey O’Brien steered a header wide from eight yards out.

In the 56th minute, Razvan Rat sent a raking ball into the area and Cole sent a scruffy shot wide.

Arsenal were starting to look ragged but they summoned a response.

Cazorla shot was blocked after they forced a series of corners. On the hour the visitors fashioned a fine chance when the Spaniard’s shot was beaten out by Adrian to Ozil just outside the area. The German fired first-time toward goal but the keeper responded well to kick the ball away.

Shortly afterwards, Ramsey limped off and Podolski came on for his first action since late August. He was involved almost immediately when trying to convert a chance created by Arteta’s invention.

Arsenal had stolen the initiative. Now they were asking all the questions and, in the 68th minute, found an equaliser when Walcott’s shot trickled past two defenders and went through the hands of Adrian.

Then, almost immediately, he grabbed another.

Podolski’s assist was crucial. He steadied himself and whipped in a ball from the left. It was touched on at the near post for Walcott to power home a header from close range.

But for Adrian’s block, Podolski would have scored himself having collected Cazorla’s clever through ball.

The German did find his goal 11 minutes from time when he fired home from the edge of the area thanks to Giroud’s assist.

The strike ended West Ham’s endeavours. Arsenal could have had more through Cazorla and substitute Niklas Bendtner.

But they had done enough on the day.