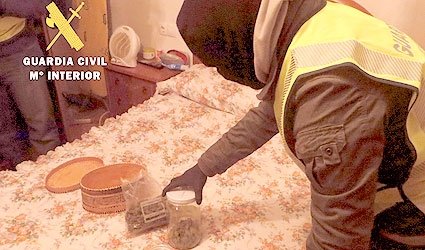 THE Guardia Civil has dismantled a drug sales point in Huercal-Overa and have arrested a 36-year-old man in an operation that has resulted in the seizure of 160 grammes of marihuana.

The investigation began in November when agents became aware of an address from where the inhabitants could be supplying marihuana. Following surveillance, agents observed a resident in the house, who on leaving took great care in order to avoid being seen. He also made quick short trips, meeting in secluded places with different people and supplying small amounts of marihuana.

With the information obtained, the Guardia conducted a search of his home, where officers located 160 grammes of marihuana, 15 bags for packaging, a precision scale and seven  marihuana cutters and plant seeds as well as a chemical accelerator  for growing marihuana quickly. Apart from the drugs, agents also found paperwork detailing the sales of the drugs.