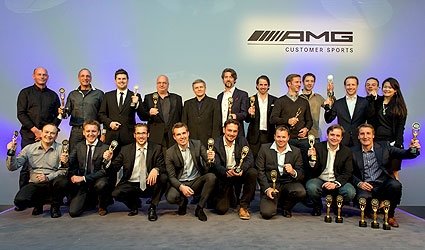 In this year’s end-of-season celebration of AMG Customer Sports in the Mercedes-Benz museum, racers and customer teams were honoured for their successes in the motorsports season 2013. Altogether, the AMG Customer Sports Award was given in twelve categories.

Tobias Moers, Chairman of the Board of Management of Mercedes-AMG GmbH: “What the AMG customer teams achieved in this season is very impressive. Four titles, 38 victories and eight times the first position in endurance races again demonstrate the high competitiveness of the SLS AMG GT3. My congratulations and thanks to all customer teams, racers as well as staff members of AMG Customer Sports and the HWA AG.”

Since the beginning of the AMG Customer Sports engagement in the end of 2010, the SLS AMG GT3 has achieved 121 successes. Until today, 70 vehicles were sold around the globe. In the 2013 motorsports season, the race gullwing started in 30 race series on five continents.

An overview of the impressive achievements of 2013:

Victory in the “Grand Slam” of the GT3 endurance classics

In 2013, especially the eight endurance classics stand out. With the victories in the four races of Dubai, Bathurst, Nürburgring and the Spa-Francorchamps, the SLS AMG GT3 and the customer teams won the “Grand Slam” of the GT3 endurance classics. This is what made the race gullwing the most successful car of this season.

As part of the end-of-season celebration of AMG Customer Sports, the guests commemorated the racer Sean Edwards (26 years). During test drives, the Briton suffered a fatal accident on 15 October in Australia. Together with Bernd Schneider, Sean Edwards won the 24 Hours of Dubai and the 24-hour race at the Nürburgring.

Bernd Schneider, AMG brand ambassador and instructor of the AMG Driving Academy, received a special trophy of Mercedes-AMG: The five-time DTM record champion and FIA GT world champion won six endurance races with the SLS AMG GT3 in 2013 and was honoured for his life’s work.

The season 2013 was very special for Schneider, who managed the challenge of the development and test programme for the SLS AMG GT3 together with Thomas Jäger. “This year, I was able to end all GT3 endurance races on the first position. I am proud of that to the same extent as I am proud of the fact that I am a racer for Mercedes-Benz and AMG. I want to thank all team and driver colleagues, AMG Customer Sports and the HWA AG. I give my special thanks to Sean Edwards, who lamentably passed away far too early.

An overview of all AMG customer teams of the season 2013:

In the end-of-season celebration, Jochen Bitzer was presented as the new head of AMG Customer Sports (starting on 1 January 2014): “I am looking forward to my new task. I am proud to be part of the AMG family and dedicate myself to further increase the success of the AMG Customer Sports Programme.“ Jochen Bitzer, 39 years old, studied sports marketing and has been working for Mercedes-Benz Motorsport since 2002. In 2009 he took the overall responsibility for the motorsports marketing of Mercedes-Benz in the Formula 1 and the DTM.

Start of the motorsports season 2014 with the Dubai 24 Hours

The end of the season 2013 is at the same time the start of the motorsports year 2014, as the preparations are going on. Five race gullwings will start in the Dubai 24 Hours (10 to 11 January 2014). The customer teams Abu Dhabi by Black Falcon, Black Falcon, Car Collection, De Lorenzi Racing and ALL-INKL.COM Münnich Motorsport will face the competition in the United Arab Emirates.

The Mercedes-AMG GmbH further increases its customer sports engagement. In 2014, the new CLA 45 AMG Racing Series will have its debut on the race track. The four-door high performance coupé on basis of the 45 AMG standard version will first participate in a race as part of the „Mercedes-Benz Challenge“ in Brazil. In April 2014, 25 vehicles as well as 21 vehicles of the C 250 Turbo will take start positions. The race series comprises eight events.