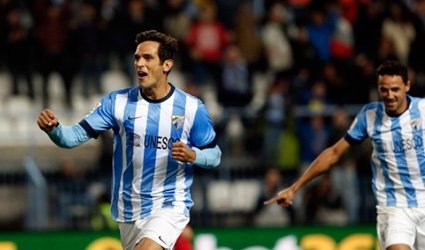 Málaga CF was victorious at La Rosaleda tonight against Getafe CF, thanks to a Santa Cruz goal. Bernd Schuster’s men were the superior side this evening, achieving an impressive win in their last home game of the year.

Málaga CF got off to an active start, taking the initiative in search of a goal from the kick off.  Despite excellent movement around the field by Juanmi and Eliseu, a strategic header towards goal from Getafe’s Rafa could have changed the run of play in minute 12, although the ball sailed over Willy Caballero’s crossbar.

Following this tight control of the game, a good opportunity arose for Schuster’s men; impressive play from Morales in the rival defence area led to a promising shot at goal, but the ball clashed with the far post and led to a corner kick.  Sergio Sánchez gained possession, but Getafe keeper, Moyá, put paid to any chance of a local goal.

The best goal opportunity of the match so far came in minute 22 when a powerful Antunes shot from the left wing arrived at the far post to greet a waiting Juanmi who looked certain to get the glory, but the ball hit the post.&nbsp; Despite numerous chances for the Blue and Whites to open the scoring, and a near miss for Getafe, the match remained goalless at half time.


The second half got underway in much the same way as the first.  Another chance for Málaga CF, this time from Tissone, led to a good save from Moyá, impeding any chance for a deflection from Juanmi.  The Coín-born striker fought on, taking advantage of a mistake by Moyá, but didn’t count on the lightning reaction from the Getafe keeper, and the ball cruised over the top of the goal in the 70

Schuster made a few changes to the line-up, which saw the introduction of Santa Cruz and Duda – both playing a part in the Málaga goal.  Only the second time he touched the ball – the first led to a free kick – a fantastic header into goal from Santa Cruz following the Duda free kick opened the scoring for the Blue and Whites, and saw the Paraguayan striker get the glory for Málaga CF following a recent injury.


Málaga CF kept a crucial three points at home this evening, ahead of the last match of the year against Elche next week.