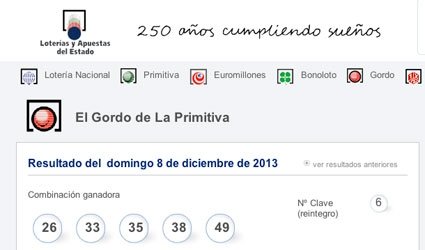 A LUCKY Torrevieja resident will receive a total of €49,966.24 for a second prize in the Spanish El Gordo de la Primitiva lottery.

He was one of four second-class winners, with five numbers. The other winning tickets were sold in San Fernando (Cadiz), in Madrid, and in Moraleja (Caceres).

There are no first-prize winning tickets (five numbers plus the key number), so the pot generated will rollover and come into play in the draw for El Gordo de La Primitiva on Sunday, when €9 million will be up for grabs.