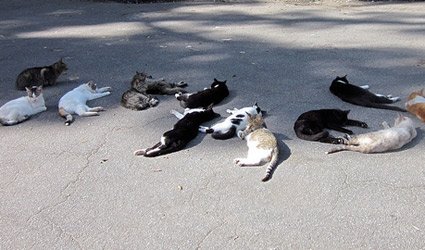 A CAT colony in around the Krekovic museum in the Llevant industrial park of Palma is causing conflict in the area.

A neighbours’ association has been accused of trying to kill the 14 animals living in the controlled colony, which is allowed by the city hall, and looked after by some locals.

The association has reported a “filth problem, bad odours and fleas, especially in the summer,” which it says it wants to avoid.

But an animal’s rights association has accused them of trying to poison the cats.

“We don’t abuse animals, we’re only asking the city hall to relocate the colony to another place where they’re not a nuisance to the neighbours,” said the president of the association Mari Carmen Bueno.

Members of the neighbours’ association have lodged a complaint against the animal rights association’s accusations, which they consider part of a campaign to discredit them.

In addition, they have asked both the city hall and the regional government to take part in the conflict as they give permits for cat colonies in’ inappropriate locations’.