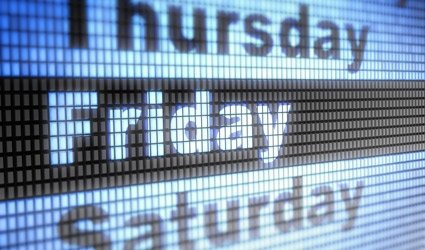 FRIDAY is the day when people are most likely to over indulge on food and drink and skip the diet.

A survey of 600 people found that eight in 10 admitted to relaxing their diet and fitness regimes ahead of the weekend. More than six out of 10 (61 per cent) exercised regularly, but only 12 per cent did so on a Friday with four in 10 admitting they were more likely to have a cooked breakfast on a Friday rather than a healthier option. Forty-six per cent said Friday was the day when they were most tempted to indulge in the office and raid the biscuit tin and vending machine for sweet treats.