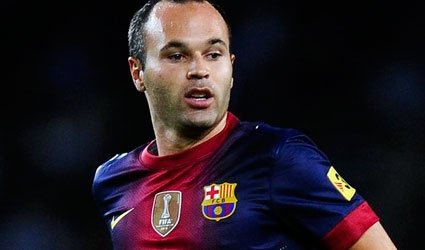 PRESS reports are linking Barcelona’s star midfielder Andres Iniesta with Manchester United. The Spanish international, who has had a glittering trophy-laden career, has so far failed to sign a new contract with the Catalan club, raising the possibility of him moving on soon.

Manchester United are known to be looking for a world class creative midfielder, and Iniesta would fit the bill.

Spanish press reports have suggested that the contract negotiations are getting increasingly volatile and heated between Barcelona and 29-year-old Iniesta, who has been with the club from schoolboy level. Iniesta has 18 months left on his current contract and Barcelona may decide to sell in the January transfer window before his value plummets as his contract winds down.

Manchester United are known admirers of his. It may be third time lucky for them after failed summer attempts to capture two other Barcelona players in Cesc Fabregas and Thiago Alcantara. The former stayed at Barcelona while Alcantara moved to Champions League winners Bayern Munich to link up with former Barcelona manager Pep Guardiola.

News
The heartbroken family of a Scottish mum who tragically died while on holiday in Spain are desperate to bring her home. She died after...

UK
Sir Tony Blair has come out swinging for the current government in his first speech since the backlash over his knighthood occurred. He said...