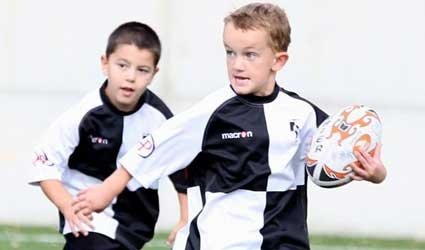 There was a long day of rugby at the Calvia Municipal Rugby pitch in Son Caliu last Saturday with plenty of action and something for all ages.

The second Rugby Day in the Series for the U8,10 and 12 year old teams from RC Ponent, Agora Portals, Mallorca Bocs RUC and organisers El Toro RC kicked off promptly on a sunny Saturday morning in front of a large crowd of appreciative spectators who enjoyed watching the youngsters playing their favourite sport. The children are very competitive and not afraid to put their all into the short but intense matches. In the U8 and U10 League RC Ponent came out winners whilst in the U12 group Agora Portals were the victors. Around a hundred players joined together afterwards with coaches and parents in the traditional “tercer tiempo.”

In their first match of the regional league Ibiza suffered a disappointing defeat at the hands of a strong El Toro team who are determined to stay at the top of the League and repeat their success of last season.

In a one-sided match, Ibiza spent much of the time defending their try line and the few attempts at breaking away with the ball were quickly chased down a fast El Toro team. The final score was 88 to 0 with the tries scored by various members of the team. This win gives El Toro RC a bonus point for four tries scored.

In other matches in this league, Corsaris RFC played RC Ponent in an intense but friendly match in which the visitors took advantage of weaknesses in the home team to push through to the score line. Corsaris tried their hardest but at the final whistle the score was 10 – 29 to RC Ponent. Although Corsaris saw a huge improvement from the week before, especially amongst their tireless and incisive pack of forwards, they know they still need to keep working.

Bahia RC travelled to Menorca to play the first match of the season in Mahon in a game which kept the spectators` interest until the final minutes. The Menorquin team began strongly with some rapid play and scored a try within the first few minutes.  Bahia RC made the most of a couple of handling errors by the Menorquins to score. During the second half the score was even until the final moments when a last push by Bahia RC resulted in a try and the win by 14 points to 18. Truc recognise that even though their game has improved they still have to win a game.

Sunday saw the first match for the newcomers to the league, Pollença RC, against Dimonis RC. During the first 15 minutes mistakes by Pollença gave Dimonis the chance to score three tries. The home team reacted to this by scoring a try of their own which was converted. By half time the score was 7 to 22 and Pollença were still fighting hard. With twenty minutes to go Pollença gave away more penalty kicks which gave the team from Manacor the chance to put a total of 53 points on the board. Given their inexperience Pollença appreciate that the result was fair but they still intend to keep working hard on their game.

In the Girls Rugby 7’s series RC Ponent avenged their defeat last week against El Toro RC even though they were missing players due to injury or suspension. The local team pushed hard but weren’t quite good enough to beat the visitors.

The third in the series for the U16 Michel Rodier Trophy saw A and B teams from El Toro RC and RC Ponent  playing short matches in teams of seven. RC Ponent A came out winners followed by El Toro RC A team, Ponent B and El Toro B.

Now that the month of November has arrived many players from teams around the Islands have joined in the worldwide campaign to raise awareness of prostate and testicular cancer by growing a moustache of some description.

Lots of Rugby coming up next weekend.

The first Mallorca Flag Rugby tournament takes place in the San Fernando Stadium in Palma between 11am and 1.30pm

Saturday 9th November in Son Caliu starts with the second leg in the U14 Sevens Series, kick-off 11.30 followed at 2.30pm by the U18 XV Mallorca League match between El Toro RC and RC Ponent. More action in Son Caliu at 5.30pm when El Toro RC are hosts to Corsaris in the Senior Regional League.

Matches in Principes de España stadium kick-off at 3pm with the National League match between RC Ponent and Sitges RC. This is followed at 5pm by the Regional league match where Bahia RC plays Pollença RC.

Sunday  has RC Ponent at home in Principes de España to Truc Menorca, kick-off at 10am and Ibiza RC are away to Dimonis RC in Manacor, kick-off at 2pm