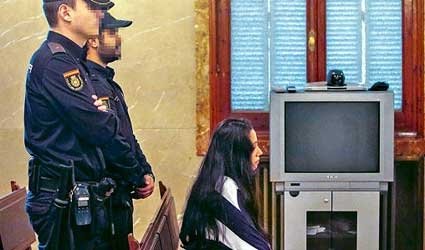 A WOMAN accused of killing her ex boyfriend says he tried to rape her.

Alba Mary M.R. has admitted stabbing her ex boyfriend inside his car in Ibiza because he wouldn´t stop touching her, but denys murder.

“After the stabbing, he lifted his head and started the car, I managed to get out and he left driving,”said Alba Mary.

“That night Cesar had taken me to an isolated area. He turned off his car and started to touch me. I said no, that nothing would happen, that we were not going to have sex. But he said that he needed to be with me, that he couldn´t wait anymore.

“I started to panic, I was scared. I tried to find anything in the car to hit him with, and that’s when I found the knife. He was holding my wrist with his left hand and touching me at the same time with the other. He leaned towards me once again and that was the moment I stabbed him”.

The 37-year-old defendant, originally from Colombia, faces a  12 and a half years in jail for murder. She claims that the stabbing happened as she was defending herself from being abused. According to her version, it wasn´t the first time this happened. Alba Mary pointed out to another two occasions when her ex boyfriend tried to abuse her, but she was able to stop him.