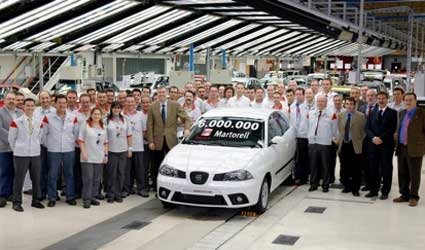 THE SEAT factory in Martorell (Barcelona) has been distinguished with the Automotive Lean Production award for the quality and efficiency of its production processes.

More specifically, the Spanish company was singled out in the OEM category (Original Equipment Manufacturer) in an annual study conducted by the German trade journal Automobil Produktion.

The jury based its decision on the improvements and constant innovation implemented by the manufacturer in recent years to streamline its production processes.

It was the first time in the eight editions of these industry honours that the jury had awarded a first-place finish to a Spanish factory.

According to the panel of jury members, SEAT has succeeded in implementing and developing a production system that comprehensively reflects current Lean Manufacturing principles, based on doing things more efficiently, especially in the areas of quality, logistics and personnel development.

SEAT Vice-president for Production Dr. Andreas Tostmann and SEAT Head of Martorell Production Plant Dr. Stefan Loth were given the international award in a ceremony held in Wolfsburg, Germany.