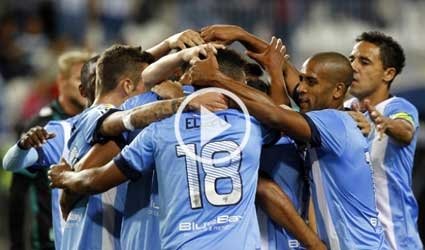 Malaga CF returned to winning ways this evening with a 3-2 victory over Betis, following a goal in stoppage time by reserve team player, Samuel. Bernd Schuster’s men took the lead twice, with Pepe Mel’s men equalising on both occasions from set pieces.

The match got underway with a determined performance from both sides, however neither created any real danger around the goal areas.  The first shot at goal came in minute 7 from a set piece.  An Eliseu corner gave Weligton a promising chance to find the target, but Andersen prevented an early goal without too much trouble.

Malaga scored the first goal of the game, which began with a good display from Tissone, who passed to Eliseu.  The Portuguese-born winger found Roque Santa Cruz in front of the six-yard box who headed the ball into the back of the net on his second attempt at goal.

Following the Malaga CF goal, the Blue and Whites took control of the game.  Another two chances for the locals, from Tissone and Santa Cruz failed to find the net, as the ball sailed over the crossbar.

Pepe Mel’s Betis equalised after the 30-minute mark from a free kick by Verdu in front of the goal area, rendering a save impossible for Willy.  The Green and Whites evened up the score board from their first goal opportunity of the match.

Although Bernd Schuster’s men piled the pressure on the visitors during the final minutes of the first half, the score was tied at 1-1 at half time.

The Blue and Whites got off to a strong start in the second half, surrounding Andersen’s goal area.  In the 50th minute, a head collision between Fabrice and Perquis left the Betis player unconscious.  He was taken off the pitch in an ambulance and rushed to the city’s Carlos Haya hospital.

A chance for Betis came in the 60th minute following a pass from Vadillo, but a Caballero save led to a corner kick for the visitors.  Just a minute later, Málaga resumed their lead with an excellent display from Fabrice on the left wing, through to Portillo in front of goal, who passed the ball to Eliseu to smash the ball into the back of Andersen’s net.

However the Blue and Whites’ joy was short-lived.  Another set piece resulted in a goal for Mel’s men.  A Juan Carlos free kick set up the ball for Jordi Figueras, who found the net to put his team back in the game.  Play continued in much the same vein as time went on, but the score board remained level.

Betis maintained a strong defence which made it difficult for Málaga to get near the goal area.  Vadillo came close to Willy’s goal a couple of times, but was unsuccessful in his quest to score.

Málaga weren’t about to throw in the towel.  Darder launched a powerful shot at goal, but the ball went wide of the net.  Seconds later, Juanmi, who had substituted Santa Cruz on the pitch, had the target in his sights following a pass from Portillo, but goalkeeper Andersen stopped a third Malaga goal.

However the home team was about to clinch victory in stoppage time.  A pass from Eliseu on the goal line landed at the feet of Portillo, whose shot at goal deflected off the post, but Samuel gained possession and scored the winning goal, his first in an official match.  With a 3-2 win, the Blue and Whites kept a much-needed three points at home.