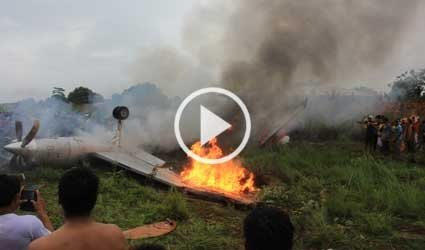 LA PAZ (Reuters) – A Bolivian plane carrying 18 people crashed on Sunday while trying to land during bad weather in the north of the Andean country, killing eight passengers and injuring the others on board, the director of a local hospital told Reuters.

Heavy rain was falling as the small turboprop plane operated by local airline Aerocon tried to land in Riberalta, in Beni department near the Brazilian border, according to witnesses.

The plane took off from Trinidad, Beni’s capital, Aerocon said earlier on Sunday, without providing a death toll.

Eighteen people were on board, according to the director of the Riberalta hospital, Jose Luis Pereira.

“(There were) 16 passengers and the pilot and co-pilot, of whom 10 survived and eight died,” he told Reuters. “The pilot and the co-pilot are in the gravest situation … Seven (bodies) are (so) charred, we can’t identify them.”

A photo on the website of local newspaper La Razon showed smoke billowing from a propeller lying on the grass.

President Evo Morales said he had ordered “a deep investigation” into the accident and “drastic sanctions on the company.”