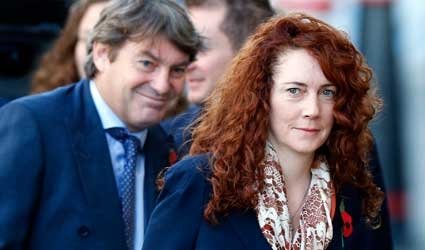 LONDON (Reuters) – Rebekah Brooks, the former boss of Rupert Murdoch’s British newspaper arm, and her husband were involved in an elaborate but botched plan to hide computers and documents from police investigating phone-hacking, a London court heard on Monday.

Brooks, a former editor of Murdoch’s News of the World and Sun newspapers, also arranged with her personal assistant for seven boxes full of her archived notebooks to be spirited away before detectives could get hold of them, prosecutor Andrew Edis told England’s Central Criminal Court, the Old Bailey.

Brooks was arrested in July 2011 and later charged with conspiracy to illegally intercept voicemails on mobile phones, authorising illegal payments to public officials, and perverting the course of justice by hampering the police inquiry. She denies the charges.

In July 2011, News International, the British arm of News Corp, became engulfed in a “media firestorm” after news that journalists had hacked the phone of a murdered schoolgirl, Edis said.

The furore led to the closure of the 168-year-old News of the World and Brooks’s resignation from the company.

The court was told that Hanna had organised an operation named “Blackhawk” to protect Brooks and her husband, both good friends of Prime Minister David Cameron, that led to attempts to hide material from detectives.

On July 17, the day Rebekah Brooks was first arrested but before police could begin searches, Edis said her husband had been recorded on closed circuit TV hiding a bag and a laptop beside bins in the underground car park of their flat in London.

These were collected by Hanna shortly afterwards and taken away. After numerous contacts during the day, it was arranged for the computer and other material to be returned, Edis said, and later one of Hanna’s team – pretending he was delivering pizzas – put them back behind the bins in a black plastic bag.