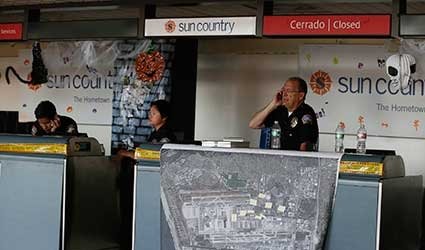 (Reuters) – The suspected gunman in last week’s deadly attack at Los Angeles International Airport wrote a note saying he intended to die after killing at least one security officer, the chairman of the U.S. House Committee on Homeland Security said on Sunday.

Ciancia is accused of fatally shooting a Transportation Security Administration officer, the first employee from the agency to die in the line of duty since it was created 12 years ago. Airport police shot and wounded the gunman, ending the rampage.

“It’s clearly one of those notes that reads, ‘I’m going to kill people and I don’t want to kill civilians,’ with the idea that he’s going to die at the end of this,” McCaul, who said he had read the note, told CNN.

He said the note “talks a lot about killing TSA agents, and he said, ‘If I just kill one, my mission is accomplished.'”

In a criminal complaint filed on Saturday, investigators said they found a handwritten letter signed by Ciancia in his bag that addressed TSA officials, writing that he wanted to “instill fear in your traitorous minds.”

It was not immediately clear whether McCaul was referring to the same note mentioned in the complaint.

Authorities charge that Ciancia walked into the airport’s Terminal 3 on Friday morning, took out an assault rifle from his bag and opened fire, shooting dead Gerardo Hernandez, a 39-year-old TSA officer at a document checkpoint.

Ciancia, authorities charge, then went on to shoot and wound two other TSA employees and a passenger, prompting a panicked evacuation of the world’s sixth-busiest airport.

The U.S. attorney in Los Angeles has charged Ciancia with murdering a federal officer and committing violence at an international airport, crimes that carry the threat of execution if Ciancia is convicted.

McCaul suggested that the suspected shooter wanted to demonstrate what he viewed as lax security at airports.

“The other thing he wanted to talk about was how easy it is to bring a gun into an airport and do something just like he did,” McCaul said of the note.

McCaul also said that police visited Ciancia’s home after being alerted by worried relatives, but he had already left for the airport about 45 minutes before.

Ciancia’s father, who lives in Pennsville Township, New Jersey, called local police before the shooting after Ciancia, who moved to California 18 months ago and lives in suburban Los Angeles, sent his brother a worrisome text message.

McCaul said police in Pennsville contacted Los Angeles police, who then “visited the suspect’s home the morning of the shooting and missed him by literally, probably, 45 minutes.”

A spokeswoman for the Los Angeles Police Department said on Sunday she was unable to confirm or deny McCaul’s assertion.

In a message on Twitter, the Los Angeles Airport Police Division warned passengers to expect delays on Sunday as the airport returns to “full operations.”