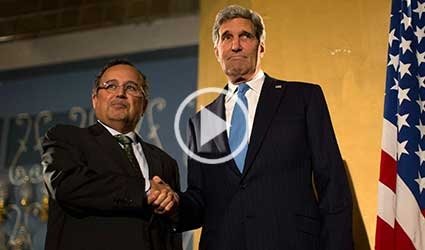 CAIRO (Reuters) – A day before Egypt’s deposed Islamist president goes on trial, U.S. Secretary of State John Kerry expressed guarded optimism on Sunday about a return to democracy in the country, as he began a tour partly aimed at easing tensions with Arab powers.

On his first visit to Egypt since the army removed president Mohamed Mursi in July, Kerry called for fair, transparent trials for all citizens. However, he described Cairo as a vital partner, apparently trying to repair relations hurt by a partial freeze in U.S. aid, pending progress on democracy.

Kerry said the relationship between the United States and Egypt should not be defined by aid but by a political and economic partnership.

When Egypt’s first democratically elected president stands trial on Monday, Kerry will already be on the next stage of his trip in Riyadh – where he must also try to soothe Saudi worries about Washington’s positive response to overtures from Iran, and its stand on the war in Syria.

Referring to his recent comment that the Egyptian generals were restoring democracy when they deposed Mursi after mass protests against his rule, Kerry said: “Thus far there are indications that this is what they are intending to do.”

Relations between the United States and Egypt have deteriorated since Mursi’s overthrow, which unleashed violence in which hundreds have died, even though the government has published a “road map” for an eventual return to democracy.

Kerry said the roadmap was “being carried out to the best of our conceptions”.

Washington has repeatedly urged the interim government to act with restraint in cracking down on Mursi’s Muslim Brotherhood and its supporters.

Kerry acknowledged that last month’s decision by President Barack Obama to freeze some military aid as well as $260 million in cash, pending progress on democracy and human rights, had not gone down well in Cairo.

“We knew that in some places obviously that wouldn’t be well received, but it’s not a punishment,” he told reporters after meeting Foreign Minister Nabil Fahmy. “President Obama has actually worked very, very hard to be able to make certain that we’re not disrupting the relationship with Egypt.”

Egypt has long been the second-largest recipient of U.S. aid after Israel, with the military receiving $1.3 billion a year. However, Fahmy, who emphasised the “turbulent” state of U.S.-Egyptian ties, told Reuters on Saturday that Egypt would look beyond the United States to meet its security needs.

Washington has also held up the delivery of four F-16 fighter jets to the Egyptian air force.

In August the army crushed two pro-Mursi protest camps and has arrested thousands of Islamist supporters, including many Brotherhood leaders.

A court order has also banned the group, Egypt’s oldest Islamist movement, and seized its funds. Mursi, who has been held incommunicado since his overthrow, is due to face charges of inciting violence with 14 other senior Brotherhood figures.