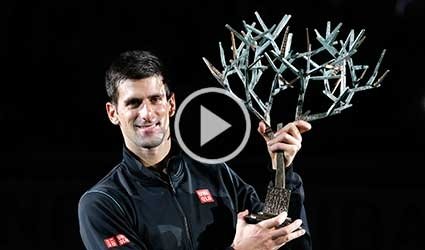 PARIS (Reuters) – Novak Djokovic beat defending champion David Ferrer of Spain 7-5 7-5 to win the Paris Masters on Sunday and keep alive his hopes of reclaiming the world number one spot by the end of the year.

The Serb recovered from a break down in both sets to snatch his third consecutive title, and the 40th of his career, following victories in Beijing and at the Shanghai Masters last month.

“I knew that coming into the match I was going to have to work for my points,” Djokovic told a news conference.

“He was not going to give me too many free points. He was going to run for every ball. He’s a great competitor, one of the most respected guys on tour because he works hard and he’s very humble and he’s a very nice person.”

It is the first time Djokovic, the 2009 Paris Masters champion, has won back-to-back Masters Series events since his successive triumphs in Rome, Madrid and Montreal in 2011.

“Summer was up and down, and now again I’m playing at a very high level and have lots of confidence in myself, in my game,” said Djokovic, who had not won a title since the Monte Carlo Masters in April prior to his success in Beijing.

He could still overthrow world number one Rafa Nadal if he wins next week’s ATP World Tour Finals in London and the Davis Cup final with Serbia, who host Czech Republic in Belgrade later this month.

Nadal will ensure he stays top of the rankings if he wins at least two matches in London.

Ferrer, who collected his first Masters Series crown last year in Paris, became the fifth defending champion to reach the final at the indoor event and fail to retain the title.

Vaccine Anniversary: Covid jab one year on in the UK

Top News
Vaccine Anniversary: Covid jab one year on in the UK.IT is one year on from the first COVID vaccine being administered in the UK,...