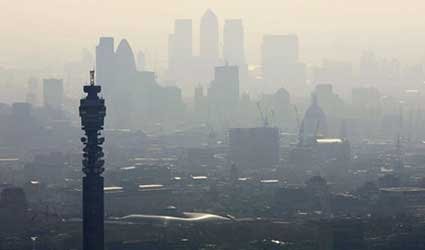 NEW YORK (Reuters Health) – Women exposed to even low levels of urban air pollution during pregnancy may be at heightened risk of having a low-birthweight baby, according to a review of evidence from Europe.

Based on data for more than 74,000 women in 12 European countries over a 15-year period, researchers say that if pollution levels were lowered to limits set by the World Health Organization (WHO), 22 percent of cases of low birthweight would be avoided.

“This is similar to the number of cases that would be prevented by cessation of maternal smoking during pregnancy in this European population,” said lead author Dr. Marie Pedersen from the Centre for Research in Environmental Epidemiology in Barcelona, Spain.

Babies who weigh less than 5.5 pounds at birth are at increased risk of respiratory problems in childhood, as well as other disorders later in life.

Pedersen’s team looked at 14 studies of pregnant women who had a child at full term between 1994 and 2011. She told Reuters Health the researchers specifically focused on areas “where people live” – as opposed to industrial locations – and selected cities that are much smaller, with less dense traffic than the average American city.

The researchers were able to obtain detailed birth records, including home addresses during pregnancy, infant birthweight and gestational age and sex, from maternal health centers in Scandinavia, Western Europe, England, Lithuania and Greece.

They also developed their own intensive air-monitoring network, sending teams to residential areas in the study and measuring pollution levels over three different seasons. Pedersen and her colleagues also used data from air monitoring stations and combined it with information on traffic density and land use.

When they looked at women’s exposure during pregnancy to the type of fine particles in vehicle exhaust and some industrial air pollution, they found that for every increase of 5 micrograms per cubic meter of air, the risk of low birthweight at term rises by 18 percent.

In addition to the babies’ weight at birth, the study looked at their head circumference because of its potential effect on brain development, according to Pedersen. They found reductions in the head size of babies whose mothers were exposed to average small particle concentrations of more than 15 micrograms per square meter.

The researchers took into account factors like maternal smoking, age, height and weight and education, and still concluded that all air pollutants, especially fine particulates, as well as traffic density, were tied to an increased risk of low birthweight and reduced average head circumference at birth.

Among the women studied, the average exposure levels to fine particulates during pregnancy ranged from less than 10 micrograms per cubic meter of air to nearly 30 micrograms.

The results were published in The Lancet Respiratory Medicine.

Current European Union air quality standards recommend limiting a person’s average fine particulate exposure over the course of a year to no more than 25 micrograms per cubic meter.

If the women in the study had all been exposed to only the WHO standard for particulates, Pedersen said, 145 cases of low birthweight among 50,151 babies would have been prevented.

“In setting new more stringent standards for ambient air pollution, the United States has taken a leadership role,” said Tracey Woodruff, director of the Program on Reproductive Health and the Environment at the University of California, San Francisco. But most cities in the United States are currently out of compliance.

“While Europe has better regulations on toxic chemicals, the United States has been a leader in this area, and it could be that this study will be more evidence for the Europeans to take action,” added Woodruff, who has researched the effects of pollution exposure during pregnancy.

Pedersen said pregnant women worldwide are exposed to air pollution at similar or even higher concentrations than those found in her group’s study, and the results “provide a clear message to policymakers to improve the quality of the air we all share.”

“We need cars and we need to heat our homes, but I think it is possible to develop cleaner cities,” she said. “It’s a change that can happen and I really hope it will, because there are so many bad health outcomes related to air pollution.”

Dr. Jonathan Grigg from Queen Mary University of London, UK, said, “‘acceptable’ levels (of air pollution) may well need to be revised downward in the light of this and other studies.”

Although this would involve weighing costs and benefits, “policy makers also have to take a precautionary approach when considering children’s health,” said Grigg, who wrote a commentary accompanying Pedersen’s study and is co-chair of the Royal College of Physicians Working Party on air quality and life effects.

Grigg, a London resident, told Reuters Health in an email that he would like to place cell-phone size personal monitors onto pregnant women to see what determines how much particulate pollution they’re exposed to. That could suggest generic precautions, like avoiding walking right next to heavily used roads, that do not “either impact on lifestyle or make women feel guilty,” he said.

He also suggested that policymakers take steps to reduce urban air pollution by requiring reductions in emissions by cars, taxis and buses. Development of stop/start technology to prevent idling, and requiring fuel cell power for buses, would also help.