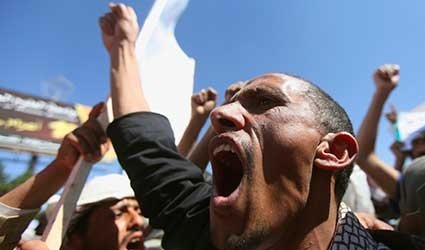 SANAA (Reuters) – The death toll in four days of clashes between rival Muslim clans in north Yemen rose to 55 on Saturday, one of the clans said, as the Yemeni government tried to broker a ceasefire in a region that lies largely outside its control.

Shi’ite Houthi rebels launched an attack on the town of Damaj, held by their Sunni Salafi rivals, on Wednesday.

The army said earlier a ceasefire had come into effect on Friday afternoon, but a Salafi spokesman then said clashes had continued on Saturday, and that in all 55 Salafis had been killed by rockets and tank fire.

Yehia Abuesbaa, the head of a presidential committee tasked with ending the fighting in Damaj, said a ceasefire was now expected to come into effect on Sunday.


He said the Houthis had sought the release of six of their followers who had been kidnapped by pro-Salafi fighters from a third group, the Al-Ahmar clan, in the neighbouring province of Omran.

The six had been freed following the intervention of President Abd-Rabbu Mansour Hadi, Abuesbaa said.


The Al-Ahmar clan includes both Sunnis and Shi’ites and its members are key figures in the Sunni Islamist Islah party.

There was no immediate independent account of Saturday’s clashes or report of Houthi casualties in Damaj, which lies in Saada, a mountainous province that has long been outside central government control.

A Houthi statement on Wednesday accused the Salafis of igniting strife by bringing thousands of foreign fighters into Damaj. The Salafis, a puritanical sect, say the foreigners are students there to study Islamic theology in a seminary built in the 1980s.

The Salafis say Damaj, which is near the Houthi-controlled city of Saada near the Saudi border, has been under rebel siege for weeks and say their rockets have hit, among other targets, student dormitories at a religious school.

Apart from the Salafi-Houthi conflict, Yemen is struggling with southern secessionists and militants of al Qaeda in the Arabian Peninsula, which has plotted attacks on U.S. airliners and targets in Saudi Arabia, the world’s top oil exporter.