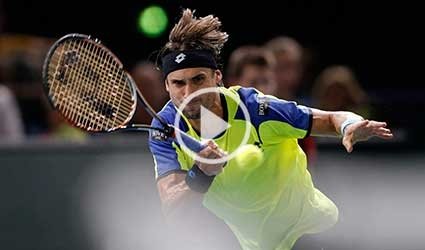 PARIS (Reuters) – Spaniard David Ferrer produced one of his finest performances to edge world number one and compatriot Rafael Nadal 6-3 7-5 in the Paris Masters semi-final on Saturday and keep alive his hopes of being the first player to retain the crown.

Third seed Ferrer, who won his first Masters Series title in Paris last year, will face Novak Djokovic in the final of the indoor event on Sunday after the Serb earlier subdued Roger Federer 4-6 6-3 6-2 in a battle of former world number ones.

Ferrer could be the first player to win back-to-back titles at the indoor event if he beats Djokovic, who needs to win the tournament to entertain his slim chance to reclaim the ATP top spot by the end of the year.

Ferrer, who entered his match with a 4-20 win-loss record against Nadal but had won their previous encounter on hard courts, at the 2011 Australian Open, dominated from the first point to the last.

He began aggressively, forcing Nadal to defend and breaking his opponent’s serve in the fourth game.

Nadal regrouped and created three break chances in the second game of the second set, only to see Ferrer level at 1-1 and then take advantage of one of the top seed’s numerous errors to lead 2-1.

Nadal threatened to record a great comeback when he levelled at 5-5, but Ferrer broke immediately and wrapped up the match on his first chance with a powerful groundstroke.

“It was a very good match for me. I played maybe my best match this season, very aggressive with my forehand and with my shots,” Ferrer told a news conference.

“I know when I play with Rafa I have to play my best tennis. And him, he hasn’t to play his best tennis too, sure. I think this week I have been playing very good … with real power with my forehand and maybe the key was my serve.