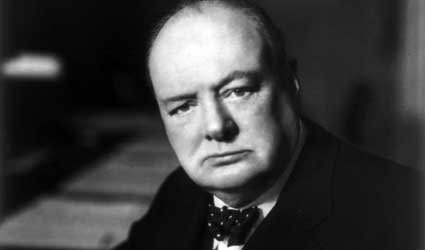 A NUMBER of amusing statements have been attributed to Winston Churchill. These have earned him applause but the handclapping is often undeserved. When confronted by Bessie Braddock MP who admonished the wartime leader for being drunk he replied. “And you are ugly but I will be sober in the morning and you will still be ugly.”

Churchill was copying an English quip of some lineage. It was old when WC Fields used the jibe in the 1930s movie It’s a Gift. This one-liner has been around for 130 years.

Public life has always been a rich source of colourful language. Lord Sandwich spoke plainly when he addressed the editor of The North Briton. “Sir, you will either die on the gallows or of the pox.”

The journalist swiftly replied. “That depends, sir, on whether I embrace your politics or your mistress.” This exchange has wrongly been attributed to Gladstone and Disraeli.

Insults must include Clarence Darrow’s: “I have never killed a man, but I have read many obituaries with great pleasure.”

One wretched author received a memo from Moses Hadas. “Thank you for sending me a copy of your book. I’ll waste no time reading it.”

Then as now, people loved the sound of their own voice. The quick-witted US President Abraham Lincoln during a debate remarked: “It is better to keep one‘s mouth shut and be thought a fool than to open it and remove all doubt.”

Fellow American, Mark Twain, once wrote: “I didn’t attend the funeral but I sent a nice letter saying I approved of it.”

Irish playwright George Bernard Shaw detested Winston Churchill. Knowing the politician had more toadies than friends he wrote. “I enclose two tickets to the first night of my new play. Bring a friend, if you have one.” Churchill replied: “Cannot possibly attend first night, will attend second, if there is one.”

Those in a poor relationship may take heart from Stephen Bishop’s remark: “I feel so miserable without you. It is almost like having you here.”  Equally mocking the opinion of Irvin S Cobb: “I have just heard about his illness. Let us hope it is nothing trivial“.

This brings us to the subject of the afterlife. This prompted Jack E Leonard to surmise: “There’s nothing wrong with you that reincarnation won’t cure.”

A young violinist after trying to impress George Bernard Shaw asked the playwright what he should play next. “Dominoes” was the curt reply.

The acclaimed conductor Sir Thomas Beecham on boarding his aircraft after a tour was asked by a luckless newspaper reporter when he would be returning to Australia. “Does anyone return to Australia?”

The American filmmaker Billy Wilder spoke for many who despair at modern music.  “He has van Gogh’s ear for music.”