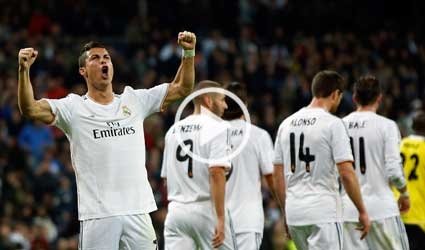 MADRID (Reuters) – Cristiano Ronaldo grabbed a hat-trick and Gareth Bale became the fifth British player to score for Real Madrid at the Bernabeu with two goals in an action-packed 7-3 La Liga win over Sevilla on Wednesday.

Making his first home start for the club, Bale also produced two assists in a performance that will help dispel doubts about the 100 million euro ($138 million) Wales winger’s form since his record move from Tottenham Hotspur last month.

France striker Karim Benzema, who has been struggling for both club and country, helped himself to two goals as third-placed Real closed within two points of Atletico Madrid ahead of their game at Granada on Thursday.

Carlo Ancelotti’s team looked far from convincing at times but what eventually became a rout was the ideal tonic after Saturday’s 2-1 defeat at leaders Barcelona.

It was the first time in almost 50 years that 10 goals were scored in a La Liga game at the Bernabeu.

Sevilla played the final quarter of an hour with 10 men after midfielder Stephane M’Bia was shown a second yellow card for catching substitute Luka Modric with a flailing arm.

The Andalusian team are 10th on 13 points, the same as 11th-placed Valencia who surrendered the lead to lose 2-1 at home to bottom club Almeria.