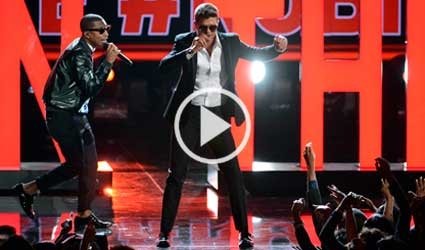 The suit was filed as a counter-claim to a case brought pre-emptively by Thicke and Williams in August seeking a court ruling to establish that “Blurred Lines” did not infringe on Gaye’s rights to his 1977 hit, “Got to Give it Up,” as members of his family had said publicly.

The suit by three of Gaye’s children cited excerpts of magazine interviews given by Thicke to support their contention that he had admitted to drawing on “Got to Give it Up” when producing and recording “Blurred Lines.”

Thicke sang the raunchy, percussive R&B song, which topped song charts around the world this year and ranked as the biggest U.S. pop hit of the summer, at this year’s MTV Video Music Awards in a provocative performance featuring pop singer Miley Cyrus.

Gaye’s daughter, Nona Marvisa Gaye, and his sons Frankie Christian Gaye and Marvin Gaye III also said in the suit that Thicke’s 2011 song “Love After War” amounted to “unlawful copying” of Gaye’s 1976 song “After the Dance.”

Their lawsuit also named Thicke’s wife, actress Paula Patton, who collaborated with her husband on “Love After War,” along with Interscope Records, Universal Music Group Recordings and Sony/ATV Music, among others.

The suit further accuses EMI, which also happens to manage the copyrights for Gaye’s music, of breach of contract and trust agreements.

The family is seeking damages of up to $150,000 per infringement as well as a portion of the profits from the success of “Blurred Lines” and “Love After War.”