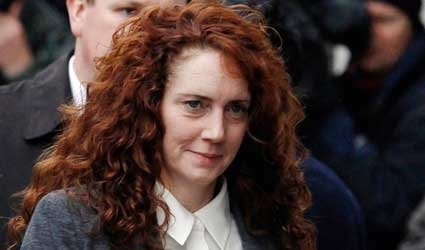 LONDON (Reuters) – The phone-hacking scandal that engulfed Rupert Murdoch’s media company burst into the open after the firm handed over three internal emails showing how to tap into the phones of senior politicians and royalty, a London court heard on Thursday.

Rebekah Brooks and Andy Coulson, two of Britain’s most high profile former newspaper editors, are on trial with six others accused of conspiring to intercept voicemail messages and make illegal payments to generate exclusive news when they ran the now defunct News of the World and its daily sister tabloid, the Sun.

The jury of nine women and three men were shown three emails from 2006 sent by Glenn Mulcaire, a private investigator who worked for the News of the World, to senior staff, giving details of the mobile phone PIN numbers that were required to intercept voicemail messages.

Prosecutor Andrew Edis told the Old Bailey court that the discovery of the emails had prompted police to look again at the conduct of staff at Murdoch’s tabloids.

“They have had quite an effect,” he said.

Brooks and Coulson and the six others, who include senior figures from Murdoch’s British newspaper arm and Brooks’s husband Charlie, all deny the charges.

On Wednesday, Edis said Brooks and Coulson must have known about phone-hacking due to their senior positions on the paper and the fact they held its purse strings.

The jury was told three senior former journalists on the paper Neville Thurlbeck, James Weatherup and Greg Miskiw, had already admitted conspiracy to hack phones. Mulcaire, who the prosecution say was an accomplished hacker, has also pleaded guilty.