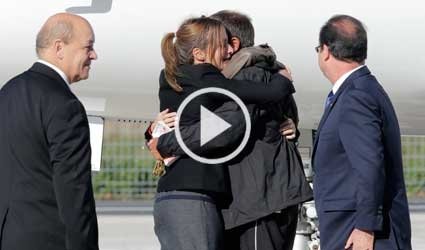 NIAMEY/PARIS (Reuters) – Four Frenchmen held hostage in the Sahara desert by al Qaeda-linked gunmen for three years flew home and were reunited with their families on Wednesday, with Paris dismissing media reports it had paid a ransom for their release.

The men, kidnapped in 2010 while working for French nuclear group Areva and a subsidiary of construction group Vinci in northern Niger, were freed on Tuesday after secret negotiations conducted by the government of Niger.

“I am very happy. It was difficult, the ordeal of a lifetime,” said Thierry Dol, one of the freed men before leaving.

Gaunt and bearded, but said to be in good health, the men embraced their families on the runway of a military airport near Paris where President Francois Hollande was waiting.

Media reports, citing unnamed sources, that a 20 million euro ransom had been paid by France’s external intelligence service overshadowed their homecoming, but the government said Hollande has banned paying hostage-takers.

“I want to hail their courage after three years of struggle, of waiting, of suffering,” Hollande said. “Today our four friends are back with their friends and family, and I wish them everything that free men could want.”

Foreign Minister Laurent Fabius, who travelled back with them to France, said the men were in shock, having been isolated for so long. “They slept well, but on the floor as they are not yet able to sleep on mattresses,” he said.

Niger’s President Mohamadou Issoufou said they had been retrieved from a remote area of northern Mali after Niger officials made contact with the kidnappers a few months ago.

Sources said negotiations with the hostage-takers were led by Mohamed Akotey, a Tuareg who joined Areva’s staff after the end of a rebellion by the Niger Movement for Justice.