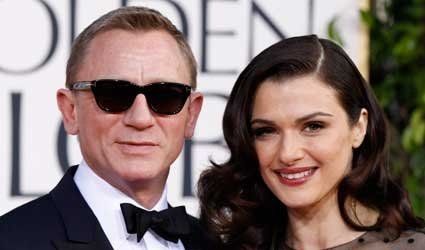 NEW YORK (Reuters) – “Betrayal,” Harold Pinter’s drama about marital infidelity starring James Bond actor Daniel Craig and his real-life wife Rachel Weisz, is one of the hottest plays on Broadway and critics said on Monday it is worth the price of the ticket.

Craig, 45, plays the cuckolded Robert, while Weisz, a best supporting actress Oscar winner for 2005’s “Constant Gardener,” is Emma, the wife who betrays him by having a seven-year affair with his best friend.

The play, the first stage collaboration for the celebrity couple since their marriage, opened on Sunday night.

“Anyone who shelled out the big bucks to see James Bond in the flesh will get more than they bargained for in Mike Nichols’ impeccable revival of ‘Betrayal,'” said the trade publication Variety.

The New York Daily News praised Craig and Weisz, 43, for the star power they brought to the play, which also stars British actor Rafe Spall, 30, as the third part of the love triangle.

“The big-screen James Bond and the ‘Constant Gardener’ Oscar winner are smashing and sexy in Mike Nichols’ graceful and stealthily devastating production of Pinter’s autobiographical play,” it said.

The Independent newspaper of London described the production as a commercial phenomenon and tickets are selling on unofficial websites for more than $650 each. The performances by Craig and Weisz, it added, “render it a Betrayal on fire.”

“Nichols’s crude and chaotic depiction of the love triangle is powerfully compelling theatre – enhanced, one feels, by the real-life frisson supplied by the onstage sparring of Weisz and Craig,” it said.

END OF THE AFFAIR

“Betrayal,” which set a box-office record for its first week of preview performances, is based on Pinter’s affair in the 1960s with British broadcaster Joan Bakewell.

Written in reverse chronology with sparse dialogue and varying plot twists, it begins with the end of the affair and the final scene depicts its beginning.

The play has had numerous revivals in England and the United States, and actors Jeremy Irons and Patricia Hodge starred in the 1983 film adaptation.

The Independent said Craig, who previously appeared on Broadway in 2009 with “Wolverine” actor Hugh Jackman in the play “A Steady Rain,” was brilliant.

“His assured performance reminds us he’s a stage natural and why so many 007 fans initially thought him insufficiently heroic to be a good Bond when the casting was first announced,” it said.

USA Today acknowledged that Weisz is an experienced stage actress, but it said her performance seemed studied – “that of an elegant actress showing us a cultured but tempestuous woman with her guard down.”

Although The New York Times praised Craig for bringing the same intensity to talking as he did to his death-defying feats as James Bond, it said the production was crude and clumsy.

When compared to other revivals it said, “this ‘Betrayal’ shrivels Pinter’s play to the dimensions of the minor tale of infidelity that London critics called it when the show first opened in 1978. Time may have proved those critics wrong, but this production seems determined to show that they were right, after all.”

“Betrayal” is scheduled to run until January 5.