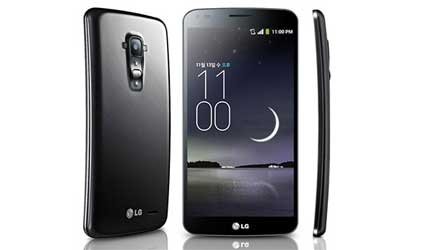 Curved displays and flexible screens are the new battleground for phone makers as the screens open up possibilities that could eventually transform the high-end smartphone market.

Both Samsung and LG’s curved phones are only available in the South Korean market as they seek to gauge consumer appetite.

Samsung launched a variant of the popular Galaxy Note earlier this month as the world’s first smartphone with a display slightly curved side to side.

The model launched on Monday by LG Electronics has a vertically curved six-inch display. The company said the phone will be available from next month through South Korea’s three mobile carriers.

Changing form factors of the battery as well as phone’s chip board and other components remain a challenge in achieving flexible devices.

LG is among a slew of smaller companies struggling to compete against Samsung and Apple Inc, the smartphone leaders that account for almost all the industry’s profits.

LG reported last week an 80 billion won (46.3 million pounds) operating loss from its handset division for the third-quarter due to marketing costs surrounding a smartphone launch in August.

The company plans to increase marketing investment in the current quarter to raise brand awareness in the high-end market, which it hopes will help expand sales later in the mid to lower-end segments.

Technology analysts and media reports say Apple is also working on a smartwatch, potentially with a curved screen, but there has been no word from the Cupertino California-based company about its plans.