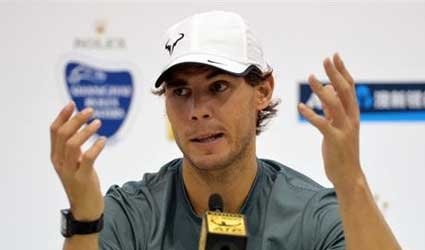 PARIS (Reuters) – Been there, done that. Roger Federer does not need to be world number one anymore and he might well be a top contender at next year’s Australian Open, his chief rival Rafa Nadal said.

Federer’s decline has been well documented since 2011, the year he failed to win a grand slam for the first time since 2003. He suffered yet another below par performance this season, at best reaching the last four at the Australian Open — the first time he has not made it to a major final since 2002.

The Swiss, however, has a record 17 grand slam titles to his name and has spent 302 weeks at the top of the ATP rankings.

He does remain a formidable opponent, according to current world number one Nadal.

“I don’t have any doubt that he will be playing better than what he did this year,” the Spaniard told a news conference at the Paris Masters, where the two could clash in the final.

“No doubt about that. His talent allows him to keep being one of the favourites, to keep winning the best tournaments of the year.

“So talking about if he’s able to be back or try to be back in the No. 1 (spot), I think it’s not his goal, because at the end he already has been there. He has been in the top positions of the ranking for a long time.”

Federer, who lost the Basel final to Juan Martin del Potro on Sunday, will be seeded fifth in Paris as he looks to secure a spot in next month’s ATP World Tour Finals.

Is the Swiss worried at the prospect of missing out on the year-end tournament? All signs point to no, said Nadal.


“At the end, what really makes you happy is to go on court with the feeling you can win the tournament. That’s probably the only thing that maybe worries him,” he said, hinting Federer probably has plans for 2014.

“His goal probably will be finish the year well and be ready to start well in Australia next year. If that happens, he will be one of the candidates to win the first grand slam of the season. That’s something that really motivates him.”

Federer, this year, has dropped out of the top four for the first time since 2003.

“”But I am sure that he’s not finished. He will work hard in the off-season to be ready for 2014. I am sure he will be back playing great tennis again,” said Nadal.