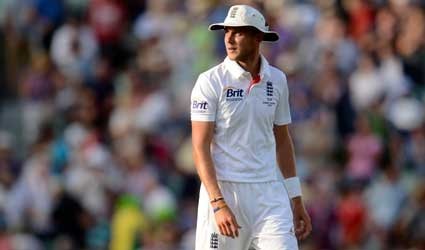 (Reuters) – England’s Stuart Broad has defended his decision not to walk in the most controversial incident of the first Ashes series this year, suggesting the huge row blew up because Australia had “wasted” their two referrals.

In the first test at Trent Bridge, the fast bowler edged a ball from spinner Ashton Agar to Michael Clarke at first slip but did not walk after umpire Aleem Dar gave him not out.

Australia had already used up all their reviews during England’s second innings in the opening test so were unable to challenge the decision. Broad later admitted hitting the ball.

“My first comment on that whole incident is I could name you 18 or 19 players who played in an Ashes series who nicked it and didn’t walk,” Broad told the BBC in an interview.

“We could be here all day if I named players from the past. I am trying to think of someone in the modern game who is consistently a walker.”

Broad rode his luck to make 65 and added 138 runs in a seventh-wicket stand with Ian Bell, which proved crucial for the hosts as they went on the win the Nottingham test by 14 runs to take a 1-0 lead in the series.

Captain Clarke and his team mates were left shaking their heads in disbelief at the decision which sparked a huge debate on Twitter about the spirit of cricket.

“It’s a really interesting debate and something that got blown so out of proportion maybe because the Australians were frustrated they had wasted two referrals,” Broad said.

“It was an important moment in the game because, let’s be honest, if Belly and I hadn’t put on those runs, we wouldn’t have won the test match so we would only have won 3-1 or something.”

Australia coach Darren Lehmann was handed a fine by the International Cricket Council after he accused Broad of “blatant cheating”.

Lehmann later apologised to Broad for the verbal attack, which came in a radio interview.

“Ryan Harris came over to me and apologised,” Broad added. “First of all he said from the players we have given him (Lehmann) a hard time and his comments were unacceptable.

“The he (Lehmann) came across and said: ‘I meant it in jest’ and I said, ‘in black and white it doesn’t look like jest to me’.

“He said something along the lines of, ‘listen to the interview’ and I said, ‘I have far better things to do with my time’, and that was about it.

“We shared a nice beer and I said, ‘see you in November’.”

Broad is expected to come under heavy fire from the fans Down Under when the return Ashes series starts with the first test at Brisbane from November 21.