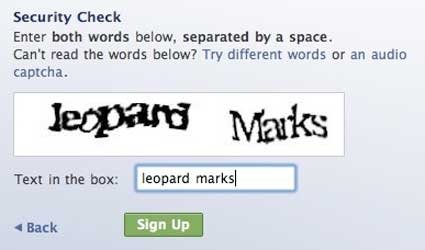 NEW YORK (Reuters) – A technology start-up said on Monday that it had come up with software that works like a human brain in one key way: it can crack CAPTCHAs, the strings of tilted, squiggly letters that websites employ to make users “prove you are human,” as Yahoo! and others put it.

San Francisco-based Vicarious developed the algorithm not for any nefarious purpose and not even to sell, said co-founder D. Scott Phoenix.

Instead, he said in a phone interview, “We wanted to show we could take the first step toward a machine that works like a human brain, and that we are the best place in the world to do artificial intelligence research.”

The company has not submitted a paper describing its methodology to an academic journal, which makes it difficult for outside experts to evaluate the claim. Vicarious offers a demonstration of its technology at http://vicarious.com, showing its algorithm breaking CAPTCHAs from Google and eBay’s PayPal, among others, but at least one expert was not impressed.

“CAPTCHAs have been around since 2000, and since 2003 there have been stories every six months claiming that computers can break them,” said computer scientist Luis von Ahn of Carnegie Mellon University, a co-developer of CAPTCHAs and founder of tech start-up reCAPTCHA, which he sold to Google in 2009. “Even if it happens with letters, CAPTCHAs will use something else, like pictures” that only humans can identify against a distorting background.

CAPTCHA stands for Completely Automated Public Turing test to tell Computers and Humans Apart. They are based on the standard set in 1950 by British mathematician Alan Turing in 1950: a machine can be deemed intelligent only if its performance is indistinguishable from a person’s.

CAPTCHAs serve that function: in order to sign up for free email, post comments, buy tickets or other online activities, more than 100,000 websites require users to prove they are human by deciphering the squiggly letters, which are often blurred, smeared and cluttered with dots and lines.

In practice, someone trying to break CAPTCHAs in order to do what a site is trying to deter – sign up for umpteen email accounts, for instance – can easily hire someone to accomplish that. “Most CAPTCHAs now are broken by paying people in Bangladesh to do it manually,” said computer scientist Greg Mori of Simon Fraser University in British Columbia, an expert on machine learning and computer vision. “For 50 cents an hour, you can get someone to break seven per minute.”


Developing software to break CAPTCHAs would in theory speed that up exponentially. Vicarious said its algorithm achieves success rates of 90 to 97 percent, depending on the difficulty of the CAPTCHA; a CAPTCHA scheme is considered broken if a machine can break just 1 percent of the ones it generates.

That makes “text-based CAPTCHAs no longer effective as a Turing test,” the company said in a statement, meaning that CAPTCHAs can no longer be used to tell human from machine.

That might be beneficial, experts said. Google’s reCAPTCHA uses words from old books and other publications that have been optically scanned but are difficult to digitize because they are so degraded. “If you can actually solve reCAPTCHAs, you can digitize old books more easily,” said Mori.

In addition, the algorithm Vicarious uses to break CAPTCHAs might be deployed more widely.

“If they’ve done it, it could improve the reliability of optical character recognition like that used in banks to scan checks and by the IRS (Internal Revenue Agency) to read scanned documents,” said Karl Groves, an independent website developer who for years has tracked claims about breaking CAPTCHAs.

The feat required relatively tiny amounts of data and computing power, Vicarious said, instead using algorithms that mimic the perceptual and cognitive abilities of the human brain.

The company has described only in general terms what it hopes to use artificial intelligence for, describing its goals as building a vision system modelled on the human brain and developing human-level artificial intelligence based on what it calls a “recursive cortical network,” for applications in robotics, medical image analysis, image and video search, and other fields.

That has been sufficient to attract more than $15 million in funding from investors including Facebook co-founder and Vicarious board member Dustin Moskovitz. In a statement, he said, “We should be careful not to underestimate the significance of Vicarious crossing this milestone,” adding that the company is “at the forefront of building the first truly intelligent machines.”