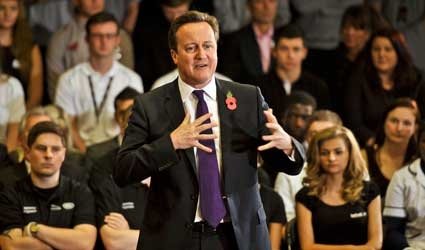 “If they don’t demonstrate some social responsibility it will be very difficult for government to stand back and not to act,” Cameron told parliament.

Cameron on Friday accused Snowden and unnamed newspapers of assisting Britain’s enemies by helping them avoid surveillance by its intelligence services, saying it was going to be harder to keep Britain safe as a result.

Disclosures about the activities of Britain’s GCHQ eavesdropping agency and its cooperation with America’s National Security Agency (NSA) have embarrassed the government and angered many lawmakers in Cameron’s ruling Conservative party who believe they have harmed national security.

While making clear his patience was running out, Cameron told lawmakers his preference was not to get heavy-handed with newspapers that published such information and that he hoped they would change their behaviour instead.

“I don’t want to have to use injunctions or D-notices (publication bans) or the other tougher measures. I think it’s much better to appeal to newspapers’ sense of social responsibility,” he said.